Today's walk is the result of needing more training for the overland trip which is only 4 weeks away.  Janine and I decided to undertake a good climbing walk while carrying our packs loaded to about 15 kilos (what were we thinking!!).


We set off from Hobart at 8.00am in quite wet conditions which improved the further south east we travelled.  By the time we got to the Peninsula at about 9.30 it was fairly dry but the threat of rain was quite evident....great, not only would we be able to test our stamina carrying the packs but we may also experience walking in the wet.


This walk, as described in the walks book, takes in the rugged top of Clemes Peak (407 metres above sea level) and the highest view point on the Peninsula, Tatnells Hill.  Rated as a medium grade walk which can be completed in three hours, there is lots to see so allowing more time is desirable.


To access the start of the track turn left off the Arthur Highway at Eaglehawk Neck onto the C338 Blowhole Road and travel for 2km before turning right into Waterfall Bay Road at a sign marked "Waterfall Bay Lookout 4km".  Drive along this road to the lookout parking area....this is the destination of the walk we completed 4/3/2011.


The track climbs steeply from the carpark around the cliffs of Waterfall Bay through tall, slim regrowth Stringybarks with an understorey including Dogwood, Musk, Native Cherry and Bedfordia.  There are also clumps of aptly named Cutting Grass so watch out, the silica crystals along the edges of the leaves will slice skin with ease.  There are a number of lookout points as the track follows the 100 metre cliffs and these provide views back along the coast towards Tasman Arch and also to a sea cave at the base of the cliffs below the carpark. 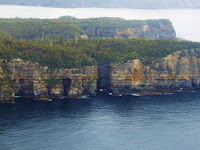 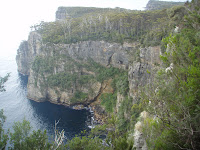 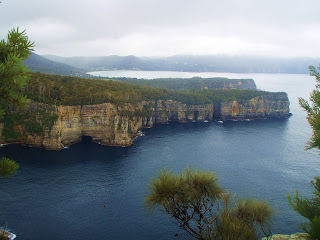 Waterfall Bay is a region known for its tunnels, caverns and caves.  One of the most spectacular is known as Cathedral Cave with its huge entrance (maximum water depth 21m) extending back into smaller caverns with narrow tunnels and cross passages, often with large schools of fish near the entrances. They are considered as Australia's best ocean cave dives, walls covered in sponges and colourful invertebrates normally found in much deeper water.  Eaglehawk Dive Centre run tours of the system from their 6m boat "DIVERSifiCATion".  The centre provides training, anyone interested in pursuing this activity can obtain information from http://www.eaglehawkdive.com.au.  Just to whet your appetite check out this video.
http://www.youtube.com/watch?v=zsUnXZm_MvE&feature=related 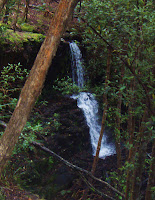 After about 20 minutes the track descends to Camp Falls, where there is a camping or picnic spot at the top of the falls.  Waterfall Creek is the source of the cascade at Waterfall Bay. At this point there is an opportunity to do a side trip and continue on for approximately 15 minutes to Waterfall Bluff where there are sensational views to the south of Cape Hauy, Totem Pole and The Candlestick. Back on the main track, cross the creek and follow the left bank upstream past a sign marked "Fortescue Bay". 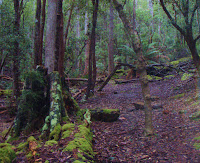 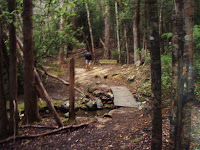 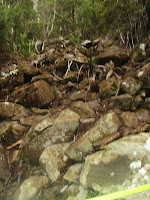 After approximately 300 metres there is a rough track  on the left.  Take this track and climb steeply through regrowth timber of Stringybark and Dogwood, crossing a small section of smooth rock. Approximately an hour after leaving Camp Falls the summit of Clemes Peak is reached by way of a rocky path, where two sharp climbing turns to the left can be easily missed.  The climb is quite relentless and I found it fairly tough going...the 15 kilo pack on my back probably didn't help matters!


Views from the summit sweep from Schouten Island in the far north, past Maria Island, the Forestier coast, Eaglehawk Neck, Waterfall Bay and Hippolyte Rock, to the Three Thumbs and Cape Hauy in the south.....the summit of Tatnells Hill can be seen in the southwest. Unfortunately, the northern views weren't visible due to the misty conditions, however the scenery was still spectacular. 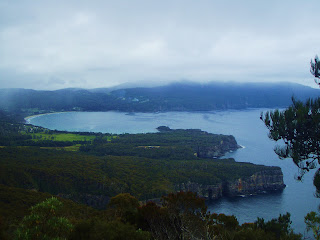 After a short break for photo ops and to admire the view we started the descent, due to the wet conditions the track was quite slippery and was actually just as hard to negotiate as the upwards trek.  The track now drops off the southern end of the first peak and follows the western base of the other peaks.  From here the route steadily descends, first to the southwest, then west across the head of a small valley.  Some very large fallen logs indicate that this section of forest was once much different from what it is today. 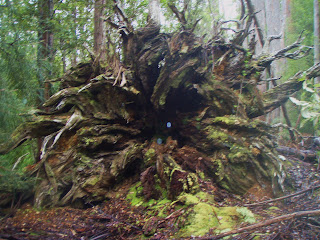 After about 30 minutes walking from the summit of Clemes Peak, the main Waterfall Bay to Fortescue Bay track is rejoined...at this junction you can turn left and head towards Tatnells Hill (as described in the walks book) or go right and head back to Camp Falls.  We decided to head back to the falls and save the trek up Tatnells Hill for another day.


The trip back takes approximately an hour and travels through wet forest, crossing and re-crossing the main creek several times. A wet forest has a ground layer in which ferns, excluding bracken, are dominant. The canopy of wet forest may be dominated by a range of Eucalypts.


From Camp Falls retrace the outward route to the Waterfall Bay car park. Once back at the carpark you will have covered just over 12 kms and been on the track for over 4 hours.
Wow, what a hike!  Hadn't encountered the steep rocky track that was a feature of this walk before, however the challenges it presented together with the wet conditions made it very satisfying to get through it relatively unscathed.  A word of warning, make sure you take some salt with you on this hike to remove leeches as they are everywhere on the track from the summit...not nice.
Posted by kmeredith at 9:03 PM

kmeredith
I'm the mum to 3 children. I own an Electrical Contracting business. Have only this year got into hiking and am loving getting out any chance I can to explore the South East of Tasmania.