I have finally got back blogging after an absence of well over a month.  Haven't been lounging around contemplating my navel during that time though, a little walk on the Overland Track has been completed as well as a couple of fun runs. Today though have managed to indulge myself in one of my favorite activities and that's doing a walk on the Tasman Peninsula.  I was very excited when Janine & Julie (both fellow Overlanders) were eager to do the walk to Cape Raoul....and this is how it went.


There are many cliff top walks on the Peninsula and Cape Raoul is one of the most spectacular on the Peninsula, if not Australia.  This walk is one of the longer coastal day walks and can be completed in a walking time of 5 hours covering 15 kms for the return trip. It is advisable though to allow longer as the marvellous scenery is worth lingering over.

As can be seen by the above map, Cape Raoul is part of the proposed Three Capes walk....a 5 night/6 day huts based walk encompassing Capes Pillar, Hauy and Raoul...the proposal is currently being reviewed by the Resource Planning and Development Commission.

The start of the walking track is accessed by travelling 9 kms past Port Arthur to the Highcroft/Stormlea turnoff and travelling a further 9 kms along Stormlea Rd to a parking area for the Shipstern Bluff, Tunnel Bay and Cape Raoul walks.  The initial section of the track crosses private land before entering the Tasman National Park. 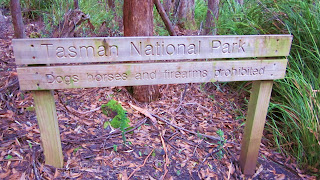 Follow the walking track through semi-open forest of Stringybark and Blue Gum with an understorey of Bedfordia, Silver and Prickly Wattle and with a ground cover dominated by thickets of Cutting Grass. After about 20 minutes and after crossing a small creek the track divides; straight ahead for Cape Raoul and right for Ship Stern Bluff and Tunnel Bay.After another 15 minutes or so walk through a much more open forest the track emerges suddenly onto the lip of the Raoul Bay Lookout. The sheer drop of over 100 metres should make you very cautious!  In saying that, there are some very spectacular views to be had from this vantage point which has an elevation of 400 metres. 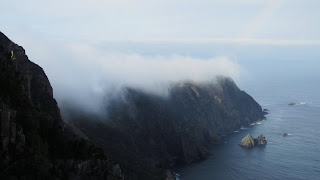 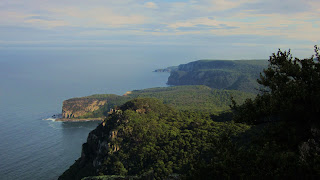 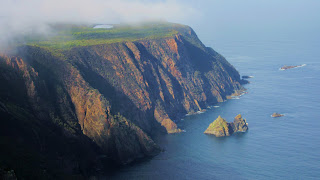 You can see from the above photos that the mist was initally hanging around the top of the Cape but after 20 minutes or so was beginning to clear...this was at about 11.00am.  The middle photo shows Shipstern Bluff jutting out to sea with Tunnel Bay the next inlet further west.
After a short break for morning tea we continued on our trek...the track continues south from the lookout just behind the cliff edge and passes over the shoulder of Mount Raoul.  The track then starts to descend the southern slopes.  It passes through a more damp section of forest with taller trees. 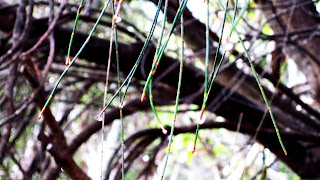 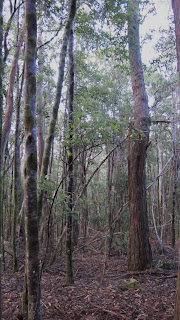 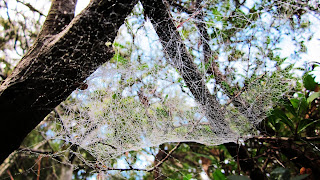 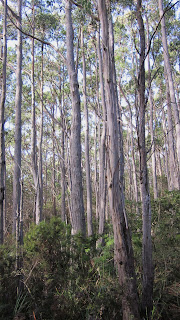 Further views are obtained in places as the track winds along the western cliffs and then enters into low She Oaks and Bull Oaks,which provide a soft and sheltered path. Once the level plateau of the cape is reached, the track follows the  cliffs south to a point opposite Raoul Rock.  It then swings east and, marked with stone cairns, crosses an open area to a shallow lake.  While it would be very difficult to get lost in this area, you need to be aware of the taped markers on shrubbery & cairns to keep on the track....this is purely from a  conservation perspective....always stay on the track! Nearby is a south-facing inlet with 200 metre vertical cliffs.
Following the cairned track southeast through low coastal scrub you will then descend gradually to the head of a western facing gully in the cliffs.  At this point a track leads off to the left to a viewpoint east of the Cape and a seal colony is visible at the end.  Even if you don't see them the seals are very vocal.  Once you return to the main track continue for another 200 metres to the Cape itself. The 360 degree panorama takes in Mount Raoul to the north, Mount Brown, Cape Pillar and Tasman Island to the east.  In front are the rugged cliffs of the Cape and the sweep of the Southern Ocean with nothing but sea between you and Antarctica....awesome! From research I have discovered that the dolerite columns at the end of the Cape were used for target practice by the British Navy during World War 1, and as a result it is a little more rugged than it would otherwise be.
The return trip is via the same route.
It is important to note that this walk features stupendous cliffs, and none of them have the slightest fall protection.  It is important to very closely supervise children at all times.  While the conditions were very mild on the day of our walk, high winds could make the cliffs more dangerous, therefore extreme caution is needed at all times. Don't let me turn you off doing this walk, the fantastic vista is something to behold and I would highly recommend this walk to everyone.
Posted by kmeredith at 10:09 PM

kmeredith
I'm the mum to 3 children. I own an Electrical Contracting business. Have only this year got into hiking and am loving getting out any chance I can to explore the South East of Tasmania.